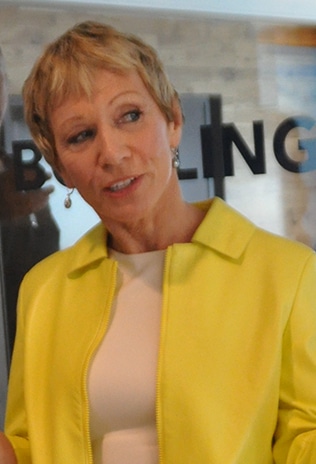 Overcoming challenges early in life, Barbara Corcoran utilizes her street smarts to build her brand and businesses. A self-made millionaire, Barbara is a successful entrepreneur, real estate mogul, savvy investor, author, and television personality. Through sheer grit and energy, she succeeded as the founder of The Corcoran Group and as a regular Shark and Executive Producer of ABC’s “Shark Tank.” Her life is a model rags-to-riches story.

What is Barbara Corcoran’s Net Worth?

Barbara Corcoran’s net worth is estimated at $100 million. While she may not be the wealthiest–she’s at the bottom of the Shark Tank pack–she often snags the best deals of this successful show. Components of her net worth come from:

Nextville: Amazing Places To Live Your Life with Warren Berger (2008)

If You Don’t Have Big Breasts, Put Ribbons On Your Pigtails: And Other Lessons

Barbara Corcoran was born March 10, 1949, in Edgewater, New Jersey, in a working-class Irish-Catholic family of modest means with nine siblings. She struggled throughout her schooling, learning later, she had dyslexia. She attended St. Cecilia High School but flunked out and transferred to Leonia High School, where she graduated as a D student.

While Barbara’s father struggled with alcohol and jumped from job to job, her mother, Florence, was her role model and inspired Barbara with invaluable lessons. Corcoran said, “Most importantly, her mother taught her children to try, even if they didn’t succeed. I learned to jump out of the window with the belief that I’d learn how to fly.”

Corcoran graduated from St. Thomas Aquinas College with an education degree in 1971. She taught school for about a year. Despite moving on, her teaching chops come in handy, especially when partnering with the founders who seek financing and expertise on Shark Tank.

According to Barbara Corcoran, after she left teaching, she worked at least 20 jobs by age 23. While she was waitressing, her boyfriend, Ray Simone, encouraged her to work for a real estate company, starting as a receptionist for the Giffuni Brothers’ real estate company in New York City.

With a $1,000 loan from Simone, she co-founded The Corcoran-Simone in 1973, a small real estate agency. Several years later, she broke up with her boyfriend and formed The Corcoran Group, becoming the real estate legend she is today. By the mid-70s, she was selling apartments on the Upper Eastside and began writing the sought-after real estate newsletter, “The Corcoran Report.” By now, she was far from her tough high school days of generating D’s.

Succeeding as a woman in the residential real estate market in NY may not seem unusual, but owning one of the largest and most successful firms typically owned and managed by men, is a deserved badge of honor for Barbara Corcoran.

Corcoran began on Shark Tank when it premiered on August 9, 2009, with Kevin O’Leary, Daymond John, Robert Herjavec, and Kevin Harrington, ahead of Lori Greiner and Mark Cuban becoming regulars as guests. Barbara is an Executive Producer of Shark Tank.

Now its 14th year, Barbara Corcoran’s track record is solid, especially her investments in food trucks, restaurants, and various food products. While she may be the oldest Shark, she is youthful and energetic, with a fantastic work ethic that doesn’t show any slowing down. She has a delightful sense of humor combined with her charisma and savvy nature. Corcoran displays moxie, snagging higher equity stakes, often with contingencies that protect her. She is in high demand as an investor.

Barbara may come back with an offer after passing on the deal, especially if she likes the entrepreneurs and their perseverance. Their challenges are often reminiscent of Barbara’s struggles when she started her business. She is known to be very supportive of entrepreneurs and is not shy to criticize those who cry on Shark Tank when facing adversity. She doesn’t suffer “complainers” as she has been there and done that.

Watching Shark Tank avidly for years, I enjoy the pitches and use their products and services. The interaction between the Sharks and the promising entrepreneurs provides educational lessons for my college students, many of whom are on their entrepreneurship path.

According to Sharkalytics, Barbara Corcoran’s results are impressive:

She invested $5.465 million on Shark Tank, reflecting 53 deals across 82 episodes since 2009. She is not the most significant investor and lags behind her peers in the percentage of pitches that result in investments. She can often be selective, but she is forceful with the deals she seeks.

From her start with a $1,000 loan and blue-collar roots, Barbara Corcoran paved her way into the competitive real estate business, building The Corcoran Group into a New York real estate firm.

She credits growing poor as an essential ingredient in her success, saying, “Poor kids have nothing to lose and nowhere to go but up.” She learned from her mom and said, “I really started my business watching how my mother ran our house.” With ten kids and a modest income, her mother needed to be frugal, an inherited trait of Barbara’s. Barbara often shares her thrifty tactics, like flying only economy class, wearing inexpensive jewelry despite her classy look, not buying bottled water, and (my favorite) she stopped buying pens for her office employees when she realized the pens cost thousands annually.

Though she lacked early academic success, Corcoran has been a quick learner in her areas of expertise. She has excellent soft skills that have helped her succeed in real estate, as a Shark, and in life. She has sharp instincts and strong communication skills while actively listening. Barbara is in high demand as a motivational speaker.

Her ability to delegate to the right people complements her talents and has helped her avoid typical stumbles in fast-growing businesses. Her solid success rate indicates her creative thinking to solve problems, her ability to collaborate with others, and having empathy and optimistic, coupled with her perseverance and grit.

Barbara is quick to call out some harsher Sharks, like Kevin O’Leary, for unnecessary mean comments. Although funny and kind, Barbara is no pushover, a desirable partner, and remains competitive.

Barbara married retired Navy Captain and former FBI agent Bill Higgins in 1988. She has two children, Tom, born in 1994, and adopted her daughter, Kate, in 2005.

Brian and Michael Speciale are behind this excellent product, The Comfy Original, a fleece-lined, oversized hooded sweatshirt in 2017, seeking $50,000 for a 20% stake in the business in season 9, episode 13.

Several Sharks were interested in this product, but Barbara Corcoran stuck to her offer of $50,000 for a 30% stake. This product has been among the most popular in Shark Tank’s series, and the company is going strong with annual sales of over $15 million.

My kids walk around all day long in this wearable blanket. It’s reversible with its soft microfiber exterior. I envied anyone wearing one as the product looks so comfortable.

After losing the interest of the other Sharks, Corcoran invested $55,000 for 15% of the company, trusting Lomac and Tselikis. The duo has expanded significantly with 42 food trucks, a few restaurants, and franchises.

Pork Barrel BBQ began in 2008 as a barbeque and spice rub business by Heath Hall and Brett Thompson, two US Capitol employees. They appeared in season 1, episode 6 of Shark Tank. They asked for a $50,000 investment for a 10% stake. Barbara Corcoran offered $50,000, but for a 50% stake that Hall and Thompson accepted. Corcoran considers this deal to be very successful.

Since then, Pork Barrel BBQ has significantly expanded its product offerings, including bacon jerky nationally, and is in thousands of stores, including Sam’s Club. In updates, sales have soared since being on Shark Tank, with annual sales of about $10 million.

Hire Santa was a creative deal, founded by Mitch Allen as “Head-Elf” in season 10, episode 12. The company was a prestige hiring agency for booking actors playing Santa Claus at high-end companies and personalized during the holiday season. Allen asked for $200,000 for a 10% stake. Several Sharks backed out, concerned about the business’s short seasonality including Barbara Corcoran.

Corcoran reentered with different terms, offering $200,000 for 50% until the $200,000 gets repaid, then the equity stake drops to 10%. Allen accepted her deal. From generating $100,000 in revenues, the company has successfully added malls, large retailers, and organizations, pushing up revenues to $1-2 million annually though they took a hit during the pandemic.

Kim Nelson pitched an heirloom southern-style four-layer cake called Daisy Cake, season two, episode six on Shark Tank, asking for $50,000 for a 25% stake. Some Sharks had concerns that the business was too small, including Barbara Corcoran, who offered $50,000 for a 25% stake but added a $1 royalty for each cake until she recouped her investment.

Nelson accepted the offer, and sales quickly went from selling 2,000 cakes per year to 2,000 daily. With Corcoran’s guidance, Nelson made essential changes to build an extensive production infrastructure and hire a team to handle the higher volume. Learning some lessons about scaling, Kim Nelson has a successful bakery business in South Carolina, with Daisy Cakes and much more.

Hollywood Producer Jason Burns came to the Shark Tank in season 9, episode 3, offering a 10% stake for a $50,000 investment in Fidgetland, which makes fidget toys that show improved concentration for individuals with ADHD, anxiety, autism, learning disabilities, and other disorders.

Barbara Corcoran and her son struggle with dyslexia, and she offered a $50,000 investment for a 20% stake, contingent on the money spent on marketing. Burns accepted her offer. Burns leveraged the interest in Shark Tank, generating $580,000 in annual revenues, which has continued growing with high demand.

All successes come with some failures that provide the best lessons. Barbara Corcoran is not immune and has deals that either weren’t completed or soured.

Here are some of her worst Shark Tank deals:

Barbara Corcoran’s upbringing and early struggles provide a desirable role model to many entrepreneurs, inspired by her multiple successes. Her winning personality, energetic nature, strong reputation, abilities, and skills suggest she is still having fun and making a difference.