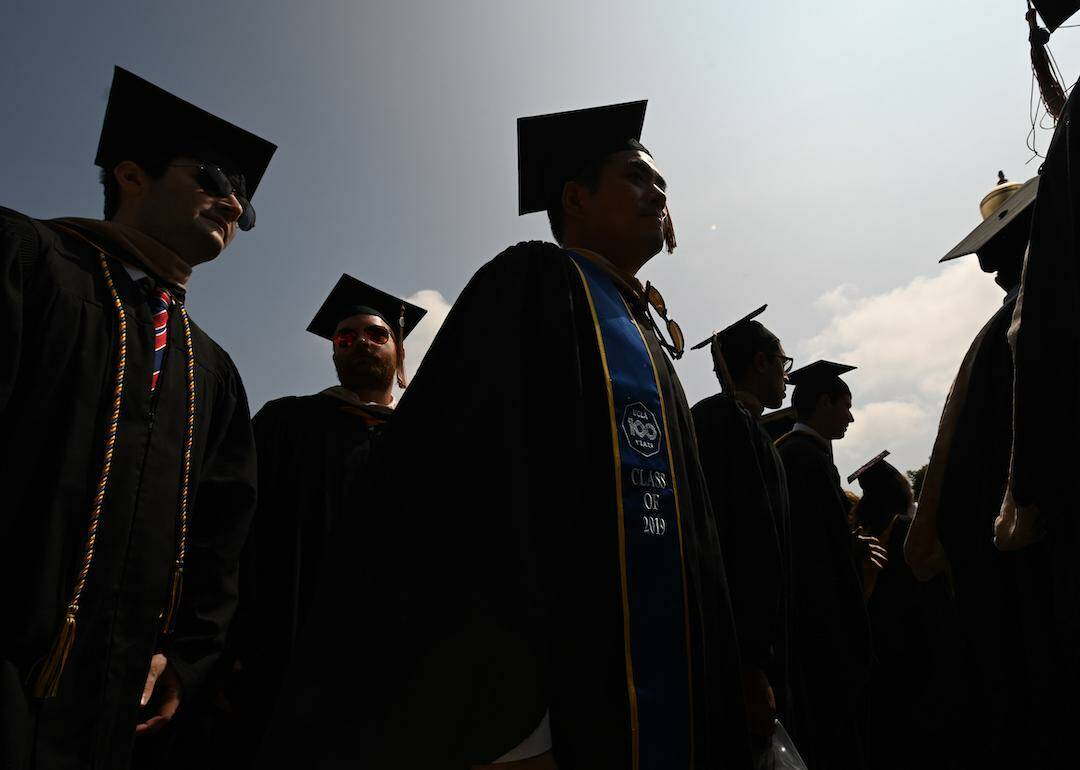 Like crumbling infrastructure or rising gas prices, student loan forgiveness is one of those far-reaching political issues affecting many Americans. Close to 1 in 5 Americans have student loans. That’s some 45 million people with a combined $1.75 trillion student loan debt.

The Biden administration’s forgiveness plan is expected to have a far-reaching impact. It will relieve $10,000 in loan debt per federal borrower with an individual income under $125,000 and a household income under $250,000; it will provide $20,000 in relief for borrowers that attended college on income-based Pell Grants.

The announcement is welcomed news for many borrowers as the CARES Act—which paused student loan repayments for most people with federal debt—was set to expire on August 31, 2022. In addition to the debt relief, the administration’s plan extends that deadline to Dec. 31, 2022.

The plan is a long time coming: President Biden first promised to forgive at least $10,000 in student loan debt on the campaign trail in early 2020 and made the same promise after he won the election in November 2020.

Stacker compiled data from the College Board, the Office of Federal Financial Aid, the National Center for Education Statistics, and the Urban Institute to visualize how student debt has grown over the past 50 years and what $10,000 of loan forgiveness could mean for borrowers. 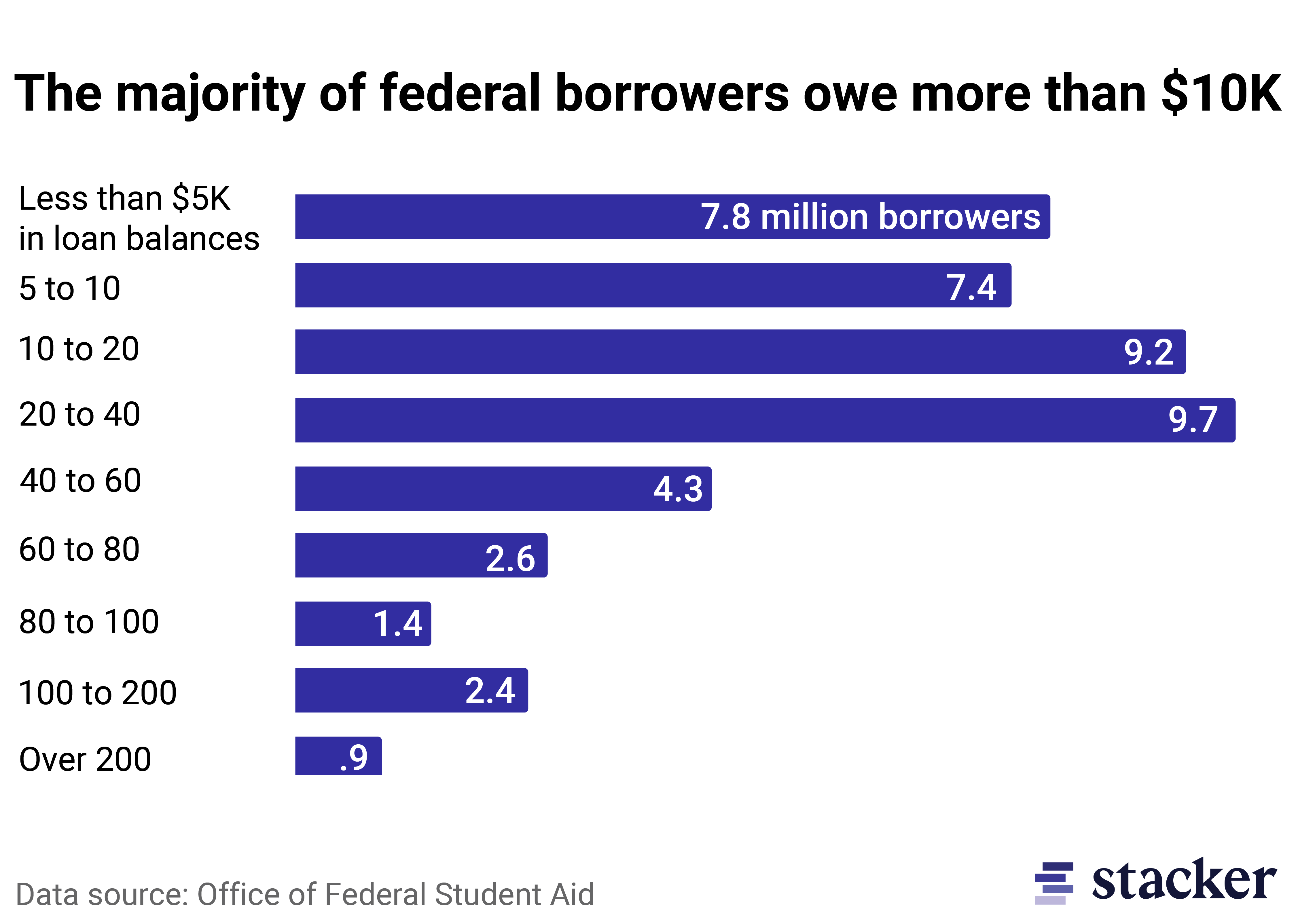 One-third of federal borrowers would see their debt completely forgiven

Even with $10,000 of student loan forgiveness per federal borrower, most Americans with student loans will still have some debt to repay. But effectively canceling most (or all) student loans for borrowers with the smallest debt would target Americans who are most likely to miss payments. Analysis from the Federal Reserve shows that people with the least amount of education debt often have more difficulty paying it off, likely because borrowers with more debt often have higher levels of education and increased earning power. In fact, from 2020-2021, 21% of borrowers with less than $15,000 in outstanding debt were late on payments, compared to 17% of borrowers with more than $15,000 in debt. The number of borrowers who fell behind on their loan payments temporarily decreased in the fall of 2021 due to COVID-19 relief efforts; however, for many, student loan payback is a long-term challenge: According to data from the Department of Education, it takes borrowers 17 years on average to pay off their student loans. 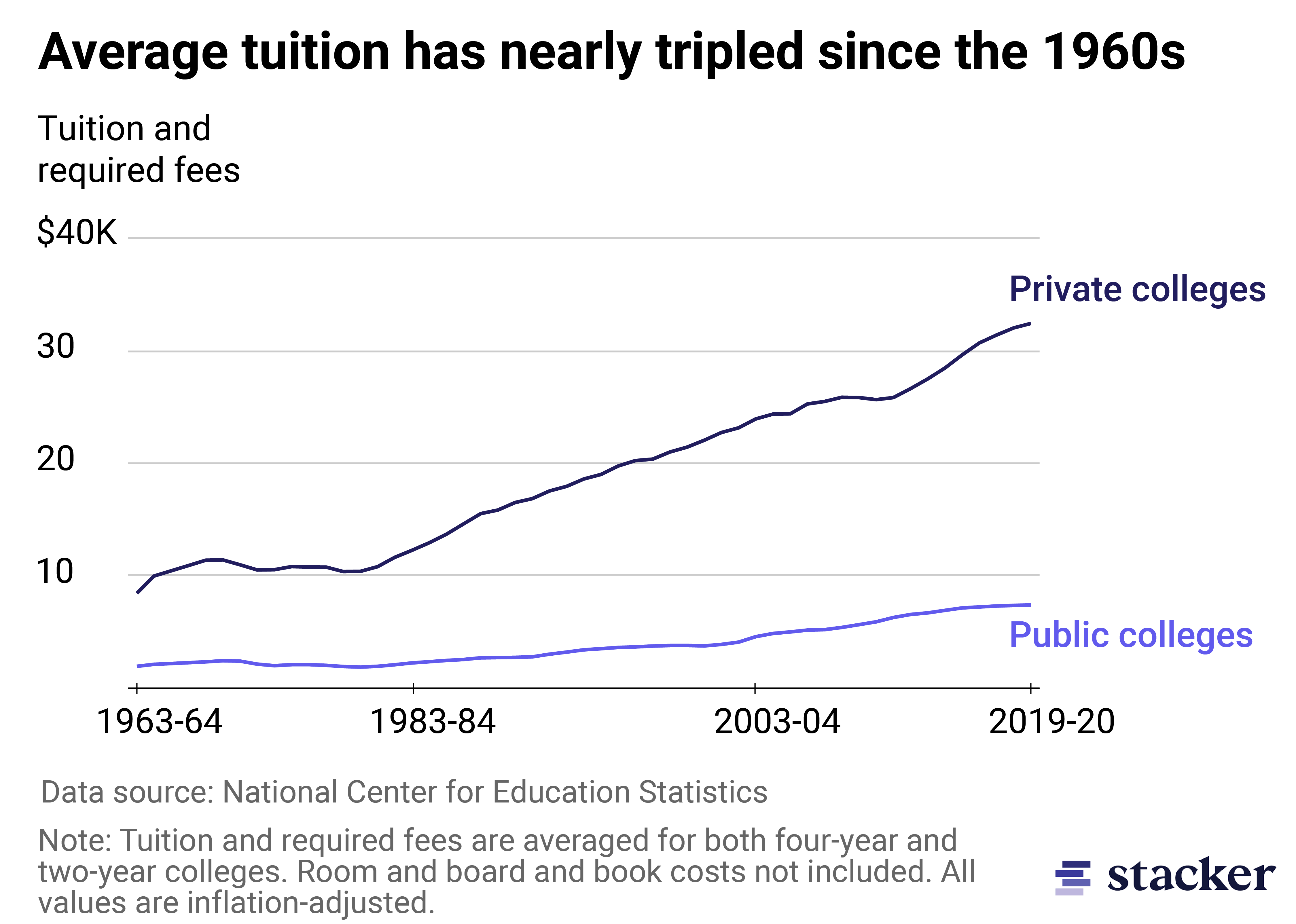 Over the past several decades, the cost of attending college in the U.S. has steadily risen largely due to a reduction in state funding, an increase in university amenities, and unprecedented demand from prospective students. According to the National Center for Education Statistics, average undergraduate tuition rose by 20% between 2011 and 2021 alone. Tuition at private, nonprofit institutions increased more than tuition at public schools during this period.

Loan balances rose right alongside tuition, too. Since 1990, the average loan balance at graduation has nearly quadrupled from just under $7,000 to $30,000 in 2020, according to the Education Data Initiative, which looked at averages across all colleges. 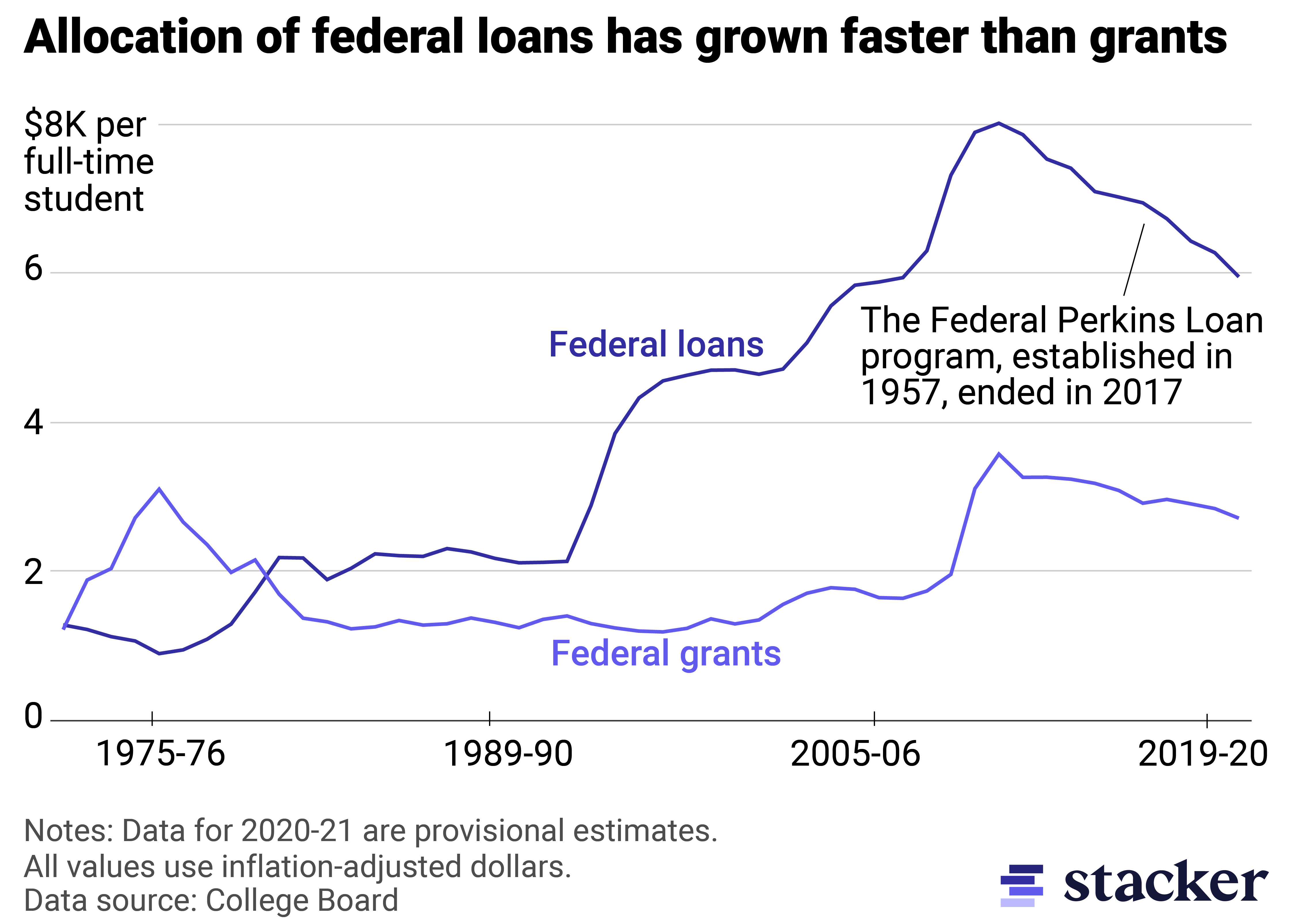 If a student doesn’t want to take on debt, federal grants—financial aid that doesn’t need to be repaid—are an attractive alternative. The problem? The amount of federal grant money available to students hasn’t kept up with continually increasing tuition or the growth of federal loans. Moreover, federal grants only cover a few thousand dollars per year per student. One of the most common types of grants, the Federal Pell Grant, awarded undergraduate students a maximum of $6,895 for the 2022-2023 school year. The Federal Supplemental Educational Opportunity Grant—also awarded to students with exceptional financial needs—ranges from just $100 to $4,000 per year. And not all students who are eligible even secure federal grant funding: A recent study found that the high school class of 2021 left $3.7 billion in Pell Grants unclaimed by not filing the FAFSA, a federal form the government uses to determine student eligibility for grants. 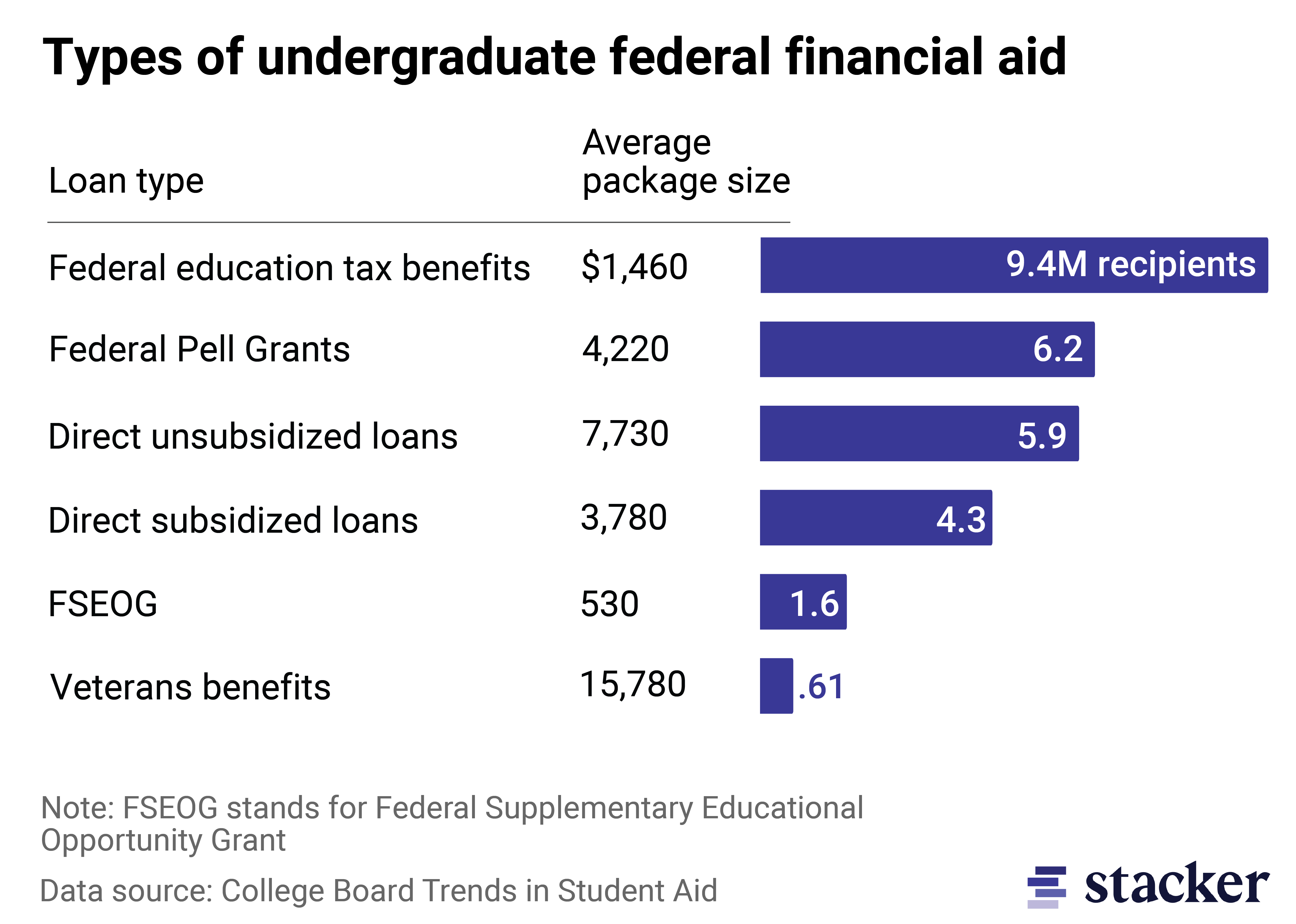 Today, loans are one of the most widely distributed forms of federal aid

For students who don’t come from families that can cover the cost of undergraduate education, navigating the financial aid application process can be challenging and confusing. You need to apply to colleges and universities, and you must file the FAFSA. Sometimes called a supplemental form called the CSS Profile to see if you qualify for federal and institutional financial aid. Unless you earn a coveted academic or athletic scholarship, qualify for need-based aid like Federal Pell Grants, or attend a university with a no-loan financial aid policy, you might turn to some form of student loan to cover the cost of your college degree.

According to a survey by Sallie Mae, 47% of families borrowed money to pay for college in 2021. About 40% of outstanding student loan debt is held by people who attended public schools. The rest is held by those who attended private nonprofit and private for-profit schools.

15 Tips Every College Grad Should Know

51 Ways To Save Money in College