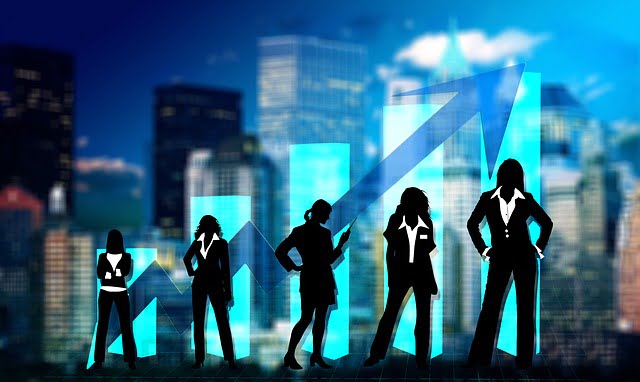 I have crossed over on the backs of Sojourner Truth, Harriet Tubman, Fannie Lou Hamer, and Madame C.J. Walker. Because of them I can now live the dream. I am the seed of the free, and I know it. I intend to bear great fruit.

White women became business owners as early as the 17th century. They often inherited these businesses from their husbands who died. However, there are examples, notably Margaret Hardenbroeck and Rebecca Lukens led and sustained companies through difficult economic times. Female entrepreneurs, then as now, encountered enormous pressures through gender discrimination and bias.

Without minimizing the heroic accomplishments of these white pioneers, I can only imagine the hardship of black female entrepreneurs that faced the dual challenges of racial and gender discrimination. Our praise and recognition is long overdue. They serve as an inspiration and role model for all women, especially black women starting up their businesses today.  We will take a look at the incredible growth of black women business ownership which is outpacing all business start-ups in recent years.

Before there were Oprah Winfrey, Sheila Johnson, and Janice Bryant Howroyd, there were earlier role models  to pay honor to. There is a rich history of successful black women entrepreneurs such as Madam C.J. Walker we should  celebrate not just during Black History month but for all time. Establishment of black-owned businesses originated before 1865. It is estimated that there were about 1.5 million free blacks at the time of the Civil War in the southern states. They either bought their freedom from their owners or outlived their usefulness.

Late in the 19th century, formation of black-owned businesses rose in response to racial discrimination associated with Jim Crow laws. These restrictive laws created segregated communities of whites and blacks. As a result, black-owned businesses grew and flourished to better serve their own communities with a sense of pride and achievement. Oklahoma’s “Black Wall Street” was among the most vibrant of these communities where numerous businesses blossomed before race riots took their toll.

For many blacks in the mid-19th into the 20th century, self-employment was their only way to have a job to meet their basic living needs. Before celebrating today’s black women entrepreneurs, there are several  black female pioneers that have earned their place in our American history. They are:

Born into slavery, Goode was the first African American woman to be granted a patent in 1885 by the US Patent and Trademark Office. After gaining her freedom, she opened a furniture store in Chicago. Goode’s customers complained about not having enough space for full sized beds. As a solution, she invented a a folding cabinet bed designed for those who lived in tight living quarters. Her bed was a precursor to today’s Murphy bed.

Keckley was able to buy her freedom and that of her son. As a successful seamstress, she created an independent business in Washington DC in 1860 based on clients who were wives of the Capitol’s elite, including Mrs. Robert E. Lee and Varina Davis, wife of Jefferson Davis. After meeting Mary Todd Lincoln at the President’s inauguration, Keckley was hired to  be her dressmaker. She also assisted her with official and social events for six years.

As personal confidante and friend to Mary Todd Lincoln, Keckley received donations from the Lincolns for aid to the black community. Later, relations between the two women were strained. Keckley authored a book, “Behind The Scenes, or Thirty Years a Slave, and Four Years in the White House.”  The book disclosed the nature of Mrs. Lincoln’s financial woes, something Mrs. Lincoln did not want to make public.

A former slave, Clara Brown was granted her freedom through the will of a plantation owner. She left for Denver, Colorado and  earned  money from her own laundry business. Brown invested her earnings into mine claims and land. With these Colorado gold rush-related investments, she accumulated $10,000 in savings. Brown became prosperous and is often known as Colorado’s first black settler and entrepreneur. She used her small fortune to educate former slaves and give them a new start.

Formerly known as Sarah Breedlove Davis, Madame CJ Walker was born to slaves then orphaned at age 7. She became a single mother, earning $1.50 as a washerwoman. She began losing her hair, having scalp issues. As a result of her interest in hair products, Walker began as a sales agent for Annie Turnbo Malone’s hair care company.

Walker surpassed Malone, aggressively promoting her manufactured hair products in black newspapers in order to target black communities. Her products were designed for kinky textured hair. She built her own hair-care business from the ground up, earning $500,000 a year.

According to Guiness World Records, Walker became the first woman to earn a personal fortune of more than $1,000,000. She employed 20,000 agents or hair culturists across the country. Her net worth at the time of her death in 1919, consisted of her substantial NY real estate holdings and her controlling interest in her hair firm, putting her over $1 million at the time of her death in 1919. She was a notable philantropist, pledging $5,000 to the NAACP, the largest gift ever received at the time. Her will bequeathed two-thirds of future net profits of her estate to charity.

Malone was no slouch in the hair business and gave Walker her start as an agent.  It was Malone who originated hair straighteners, special oils and hair stimulants for African-American women, using her own Poro formula. There certainly was a business rivalry between Walker and Malone but the latter is lesser known. Malone has her own rich legacy, having lived a longer life and earned millions. She trained 40,000 black men and women, advocated for economic independence for black people, built Poro College and provided students with financial support.

The gender gap remains in the usual places for all women. Women get less pay than men, experience longer career pauses with time out for children and other dependents. In essence, women save less for retirement than men. Despite facing challenges, women are gaining ground. Slowly, women are reaching higher corporate levels and increasingly starting their own businesses.

While non-minority women starting up their own businesses have their share of difficulties, black women entrepreneurs are further impacted by racial discrimination. This adds more pressures to developing their businesses. On the positive side, black women-owned business have been growing significantly faster.

Though the growth of black-owned women businesses are surging, they tend to have smaller, younger companies. As a result, the average revenues of $24,000 per firm for black-owned women businesses are well below the average of $142,900 for all women. That means that black women are experiencing the highest growth  but generating the lowest average revenue compared to any subsegment.

These women made their moves to start their own businesses because of poor treatment and feeling undervalued in the workplace. The women in the focus groups expressed determination, passion and faith in themselves as self-learners.

Although they had less formal training, they were motivated to serve their communities. While they had friends for moral support, some women indicated that family withheld support initially until there was some demonstration of success.

1. To Secure Capital For Their Growing Businesses

Black women are the fastest growing group of entrepreneurs. The number of startups founded by black women have more than doubled. However, they need funding to feed their growing businesses. According to Project Diane 2018, a biennial study on the state of Black Women Founders, the average funding raised by black women in the “less than $1 million” category was $42,000 compared to $1.14 million for the average seed round for all startups per Crunchbase.

As a result of gender bias, women are disadvantaged in attaining credit in comparison to men:

Only 2.7% of all venture funding goes to women CEOs, usually at later funding rounds. They only get get 25% of what they ask for compared to 50% of the funds requested by men. Black women face even greater challenges, getting a paltry 0.2% of total venture capital funding. Gender and diversity gaps impede the potential for black women entrepreneurships.

To counter those obstacles in recent years, there are rising number of firms in recent years that are devoted to helping minority women to raise capital. Some organizations provide grants, pitch competitions and crowdfunding. Shelly Bell founded Black Girl Ventures in 2016. Her organization provides comprehensive education and advisory services. They host crowdfunded pitch competitions and coaching. This list contains a number of organizations that may provide funding for black women entrepreneurs, especially in the tech area.

Having a supportive network and mentoring are critical at all stages. Finding a network and a mentor is important. According to a UPS survey of small business owners, 70% of those receiving some form of mentoring survived five or more years. That is double the rate of those who did not receive that support.

The truth is fewer women have the management experience to lead when starting their own company. According to a Leanin.org and McKinsey report, just 19% of top executives are women. Fewer than 10% of startups are owned by women. Financing groups remain predominately male-oriented.

Networks are important for emotional support. Starting your own company is fraught with stress from constant decision-making. It could be a lonely undertaking. Reach out to someone you believe has the ability to help you, especially if they have launched their own company. Don’t wait for someone to come to you.

Increasingly, there are more groups for black women entrepreneurs to turn to for financing, counseling, skills training, one-to-one mentorship, networking, local assistance and resources. Black Career Women’s Network is a national organzation that provides professional growth opportunities for African American  women. You can find mentors, peers and supportive women. All kinds of resources–capital, training, networks, mentoring–can be found in this exhaustive list.

Here are other organizations you can turn to:

Small Business Administration (SBA), through its Office of Women’s Business Ownership (OWBO) and  SCORE  have workshops for women;

Women Igniting the Spirit of Entrepreneur or WISE center is an Entrepreneurship project of the Whitman School of Management at Syracuse;

The Female Founders Alliance is an accelerator for pre-seed companies for women seeking early funding; and

Working women executives who suffer from work/life balance issues often consider starting up their own businesses as an antidote. Women still tend to shoulder more work-related to the household and child-rearing, even among couples who set out to share the workload equally. In the various studies of black women start-ups, many expressed their desire for more flexibility. They often seek to work less than 40 hours per week so they can spend more time with their children and family.

Part-time entrepreneurship called sidepreneurship in which adults can earn money on the side has been increasing in recent years. By far the highest rate of growth in the number of sidepreneur ventures is among African American/Black women. According to the 2019 American Express report, it is triple that for all businesses over the past five years: 99% compared to 32%, respectively.
https://app.convertkit.com/forms/designers/921706/edit

Black women entrepreneurs have made significant strides in owning their businesses. They represent the fastest growing subsegment of entrepreneurs. They also face double discrimination with real gender and diversity gaps when raising funds and need support. There is a rich history of inspiring black women who successfully started and managed their own businesses.   They have several challenges to overcome before the playing field is fully level.  What is most needed is determination, passion and courage besides funding opportunities.

Women And Money: 7 Steps To Control Your Finances

How Women Enrepreneurs Face Challenges And Can Overcome Them

Have you started your own business or thinking of doing so? What challenges have concerned you? Share your comments with us. We would like hear from you!